Original Japanese version was published on WebRonza on Feb. 20, 2019.

Karate Dojo in the Bedouin village of Abu Kweder

“Ichi, Nee, San (1, 2, 3),” I hear children’s excited voices from a karate dojo (studio) in a village of Abu Kweder located in the Negev Desert in Israel. In this small Bedouin village, which has no electricity, an Israeli NGO called Budo for Peace (“BFP”) runs a karate program for children. I visited this location with its founder, Mr. Danny Hakim, who holds a 7th degree black belt of Shotokan Karate, to observe a lesson. Teaching children was Hazem Abu Kweder sensei (Japanese word for teacher) who holds a 4th degree black belt. He has been teaching karate for 12 years under the BFP program and now teaches approximately 500 students at 7 dojos.

Until recently, this village did not even have a road connecting it to a main highway. All the children welcomed us with infectious smiles. A 10-year-old Kazuki Kawai, the son of Japanese Embassy’s Cultural Attaché Shion Kazuki who accompanied us, joined the lesson easily, fitting in with the Bedouin children. Mr. Hakim joined as a sensei, and about 40 children, age 6 to 18, participated in the lesson following Japanese shouts, “Rei (bow), Hajime (start), and Yame (stop).” It was obvious that their courteous manners and self-assuredness were a result of the karate lessons. This was Mr. Hakim’s vision.

Mr. Hakim came from a prominent Jewish family that immigrated from Egypt to Australia in the 1950s. Although growing up in a far away place from his ancestral homeland, he was a devoted Zionist. A life-changing moment came when his grandmother gave a gift, a year-long lesson of karate, on his Bar Mitzvah. He excelled in karate and moved to Japan in his 20s to receive more advanced lessons. There he met his life-long sensei (teacher) Master Hirokazu Kanazawa, the founder of Shotokan-do International Federation. Mr. Hakim represented Australia, Japan and Israel in numerous international karate tournaments and became a two-time world karate silver medalist.

In 2000, he immigrated to Israel, the Jewish people’s promised land. He married in 2003 and founded Budo for Peace in 2004. Its stated objectives are as follows:

To educate and instill in youth the behavioral values of tolerance, mutual respect and harmony both within themselves as well as with their neighbors and surroundings by means of traditional martial arts training and by internalizing the inherent ideals of Budo.

The founding and development of a rich international network of cultural ambassadors for peace, guided by the collective principles of Budo. The meritorious contributions and ventures of this network of like-minded people will aid in instituting branches of friendship, collaboration and co-existence in Israel, the Middle East and the world as a whole.

It was important for him that the name of his NGO contained the Japanese word “Budo,” whose meaning he explains as follows:

Budo, comprising of the Japanese words “bu”, meaning warrior, and “do”, meaning path or way, is the Japanese term for the code-of-conduct associated with martial arts for resolving conflict by peaceful means, exercising determination, self-restraint and mutual respect.

While training karate in Japan, Mr. Hakim himself learned these core values of Japanese Budo.

BFP’s logo also carries a powerful and beautiful message. Mr. Hakim personally explained it to me.

“The left fist symbolizes a rock, just as the heart is on the left side. Things that are important to you that you keep close to your heart such as your family, your values and religion/beliefs. You have to be strong like a rock.

The right hand symbolizes water. Being strong is not enough. You should also be flexible like water. Flexible in the body and in the mind.

The right hand when open is ready for friendship – a handshake.
To be strong inside (rock) and flexible outside (water).

These symbols are easy for kids to understand.”

The words in the logo, BUDO FOR PEACE, were also written in English, Hebrew and Arabic.

As a Zionist, Mr. Hakim’s mission in life is to have all the children of Israel live in a harmonious society. While being a member of the Australian karate team, whose members were immigrants from many countries, and while learning karate in Japan, Mr. Hakim experienced a sense of comradely through Budo practice with people from many different backgrounds. So there was no doubt in his mind that his goal should be harmony among many different groups within Israel— Secular Jews, Religious Jews, Ultra-Orthodox Jews, Arabs, Arab Christians, Druze, Bedouin and etc.

Today, BFP has 18 dojos of its own and 27 affiliate dojos, called KiAi Clubs, where more than 2,000 children participated in Budo practice, mostly karate. Each KiAi Club is paired with another nearby KiAi Club as its “Twin Dojo” for joint training and social activities. For example, there were two villages, one Jewish and the other Arab, less than a 10-minute walk from each other. Until children of these villages took BFP’s karate lessons they did not have any contact. Today, these children and also their parents have become friends. BFP also reaches out to the children of newly arrived immigrants.

Furthermore, Mr. Hakim has been trying to expand BFP’s activities beyond the Israeli border by reaching out to martial artists in neighboring countries. So far, people from Jordan, Egypt, Turkey, Iran, Greece and Palestinian Authority have participated in BFP’s seminars. When BFP held an international seminar in 2016, the then Japanese Ambassador Koji Tomita gave a speech praising BFP for teaching young people respect and mutual understanding through the Japanese spirit of Bushido such as self-discipline, courtesy and compassion to others.

In addition to the karate dojo, Mr. Hakim showed us BFP’s other project, called Kids Kicking Cancer (“KKC”). The program was started by an American Rabbi and martial artist, Elimelech Goldberg, who lost his daughter to leukemia. It teaches breathing, visualization and relaxation techniques, in addition to traditional martial arts to help empower the children and provide them with a sense of power, peace and purpose. Mr. Hakim serves as Chairman of its Israeli chapter.

The place we visited was the pediatric ward of Sheba Medical Center near Tel Aviv, Israel’s largest hospital. There, we saw many children receiving chemotherapy for their cancers. Ms. Jill Shames, KKC’s volunteer martial arts therapist, also joined with us. She held out a punching pad in front of each child and let them punch it. The children happily punched the bag. After several punches, Ms. Shames taught them to breathe deeply. KKC’s method tries to help children regain a sense of control over their lives. Martial arts techniques unlock that sense of power and brings them peace. In addition, KKC encourages children to teach others what they have learned, which in turn, brings purpose to their own lives.

I was delighted to see children enjoying KKC’s program. I was also moved by the presence of so many people from different backgrounds, Ultra-Orthodox Jews, Sephardic Jews, Mizrahi Jews and Arabs receiving medical care together. Some children were coming from Gaza. As I took a picture of two Palestinian boys, their beautiful mother, Ms. Shames who was Orthodox, and Mr. Hakim, I was keenly aware that this is a side of Israel which is seldom reported in Japan. 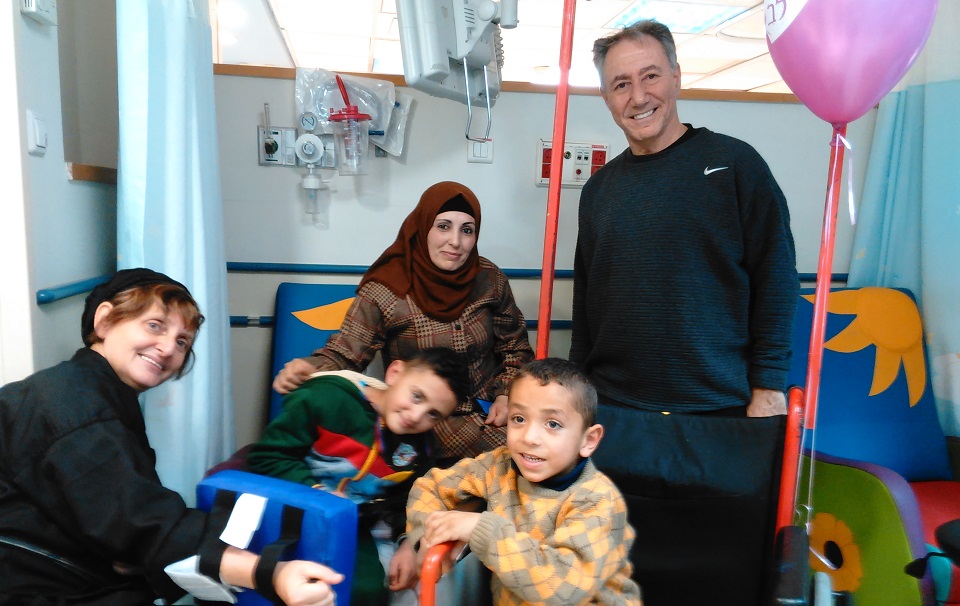 Last November, Budo for Peace won the prestigious Regional NGO of the Year Award from Monaco-based PEACE & SPORT International. Under the patronage of Prince Albert II, it promotes dialogue and reconciliation through sports in conflict areas. The news of Budo for Peace receiving this award, a testament to the success of Mr. Hakim’s 14 years of effort, was widely reported in Israel.

I had heard about Mr. Hakim’s activities, but it was through the news of his receiving this award that I decided to interview him. And as I learned more stories about him, my interest in him grew. Ms. Noa Koffler, a Japanese woman who has been living in Israel for more than 35 years, kindly offered her apartment as the venue for the interview. Ms. Koffler is the Coordinator for the Olympic Committee of Israel. She remembers Mr. Hakim even before she came to Israel when they both had attended Jewish prayer service at the Jewish Community of Japan in Tokyo.

I also learned from friends that Mr. Hakim was married to the daughter of the late Mr. David Azrieli, an influential developer who built the magnificent Azrieli Center in Tel Aviv. And his wife is now Chairman of the company, Azrieli Group.

When I finally met Mr. Hakim, he shared with me the story of his being offered to join the company by Mr. Azrieli, his future father-in-law, when he was about to marry in 2003.  But he decided to devote himself to Budo for Peace. That he made that decision during the Second Intifada attested to his courage and determination. In those days, Israeli people were targets of frequent terrorist attacks by Palestinians. Buses and restaurants were blown up by suicide bombers and hundreds of Israeli people were being killed.

In 2003, Mr. Hakim participated in the Symposium, “The Direction of Japanese Budo in the 21st century: Past, Present and Future,” organized by the Japanese Academy of Budo. He submitted a paper titled, “Budo’s Potential for Peace – Break Down Barriers in the Israeli/Palestinian Conflict.” This led to the creation of Budo for Peace. It was launched in a time when even those who supported the Oslo peace process almost gave up hope for the possibility of peace. Yet Mr. Hakim reached out to non-Jewish children without hesitation. He even produced a film about an Arab-Israeli girl, Shadya, who won a Shotokan championship.

Interestingly, the very first donation that BFP received was from the Japanese government.  Mr. Hakim applied for the “grassroots people-to-people fund” and successfully received the start-up capital he needed to get BFP off the ground. Over the years, he received endorsements and encouragements from many groups, including Palestinian ambassador to Japan and Australian Ambassador to Israel. Also, former Israeli Ambassador to Japan Mr. Eli Cohen, who recently received the Order of the Rising Sun from the Japanese government, is one of the board members of BFP.

Mr. Hakim is also one of the Directors of the US based Alliance for Middle East Peace (ALLMEP) . It is the largest and fastest-growing network of peace-building NGOs in Israel and Palestine. Budo for Peace is its member.  ALLMEP is campaigning for an International Fund for Israeli-Palestinian Peace, with legislation working its way through US Congress which would allocate $50 million toward such an instrument. Support was already secured from Britain and France. The Fund is due to go live in 2020 and could—if Japan chose to participate—become part of the way in which sport and social programs are leveraged toward peace as part of Japan’s Olympic legacy.

Mr. Hakim’s current goal is to introduce Budo for Peace during the 2020 Tokyo Olympic and Paralympic games. He would like to show how the age-old Japanese philosophy of Budo inspires today’s generation of youth from diverse backgrounds to practice coexistence and social harmony. This also resonates with the goals of the Olympics. If young Jewish and Arab children can demonstrate their karate during the Olympics, it would become a great opportunity to show one of Japan’s most successful cultural exports to the world.

👏 to Major Dana commander of Iron Dome 947 💪 who intercepted all the rockets In Ashkelon With Israel I love you 🇮🇱❤ https://t.co/SPaqUO0IR1